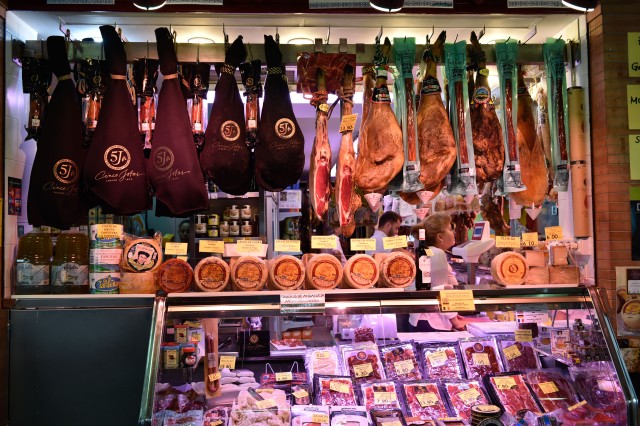 I used to go to the grocery store here at home and ask for a quarter pound of prosciutto – cured Italian ham. I thought prosciutto was prosciutto and other than how it was packaged, I figured that was all there was to it.  But not anymore. 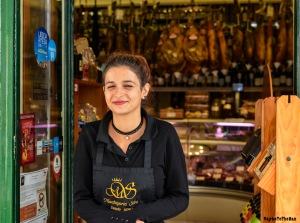 It didn’t matter where I traveled in Portugal, Spain or Italy, there was prosciutto.  In the stores, in the restaurants and at the bars. It was available everywhere. Each country had their own name for it, too.  Presunto is from Portugal. Prosciutto de Parma is from Italy. Jamón Serrano is from Spain. Jambon sec is from France (although we didn’t go to France this time). 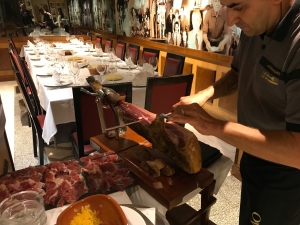 Each establishment had their prosciutto proudly displayed on a jamonera, a mount to hold the full leg for carving. Often it was on its own rolling cart with a white table cloth in order to bring it right to your table at the restaurant for your waiter to carve and serve. Sometimes it was in the front window of the meat store, enticing you to come in and buy some. 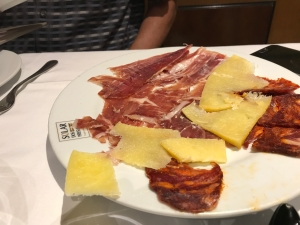 The hams are dry-cured – that is, are hung and dried for a period of months. In fact, the word ‘prosciutto’ comes from the Latin pro, meaning ‘before’, and exsuctus meaning ‘to suck out the moisture’. The Portuguese word ‘presunto’ is the same. The Spanish word ‘serrano’ can be similarly interpreted – ‘serrano’ which can be translated as ‘de la sierra’ or ‘from the mountains’, refering to the mountains up which ham is, at least using traditional methods, dried in the cool mountain air. ‘Sec’, as you might have guessed by now, means ‘dried’ in French. They also use a salting process which helps to dry the meat out.

But wait! There’s more.  There are actually many grades and qualities of these cured hams.  The most famous and the most expensive of these comes from the black Iberian pig.  When I took the walking tour of Lisbon, our guide recommended that we try to black pig in a restaurant.  It kind of scared me away thinking it was going to taste a bit game-y. I saw it on the menu once and tried it. It tasted just like a pork chop.  I didn’t give up though and I came to believe that the best was to experience what our guide had recommended was through the presunto.  That made sense.  The pork chop wasn’t impressive.  The presunto and jamón serrano were very good.  But I didn’t really learn this until later in our trip when we took a market tour and cooking class in Seville, Spain.  This is where we learned these more in depth details of this phenomenon of the cured pork.

The black Iberian pig lives primarily in the central and southwestern region of the Iberian Peninsula, which includes both Portugal and Spain. In Spain, the Black Iberian Pig is typically found in the provinces of Huelva, Córdoba , Cáceres, Badajoz , Salamanca, Ciudad Real and Seville. In Portugal the central and southern regions have an abundance of this species, with a preference for the Alentejo region. In Portugal, the Black Iberian Pig is commonly referred to as porco preto ibérico or porco alentejano. The Black Iberian Pig is ingrained in the local Portuguese culture and tradition, with annual festivals in their honor, such as the Feira do Porco Preto, an annual festival in the region of Ourique.

The standard method for developing a good cured ham comes by taking the piglets after weaning and fattening them on barley and maize for several weeks. The pigs are then allowed to roam in pasture and oak groves to feed naturally on grass, herbs, acorns, and roots, until the slaughtering time approaches. At that point, the diet may be strictly limited to olives or acorns for the best quality jamón ibérico, or may be a mix of acorns and commercial feed for lesser qualities.

The hams from the slaughtered pigs are salted and left to begin drying for two weeks, after which they are rinsed and left to dry for another four to six weeks. The curing process then takes at least twelve months, although some producers cure their jamones ibéricos for up to 48 months. 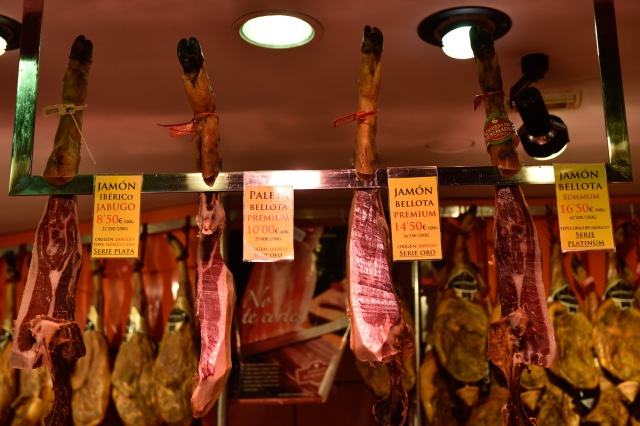 The finest hams is called jamón ibérico de bellota (bellota means acorn). This ham is from free-range pigs that roam oak forests (called dehesas) along the border between Spain and Portugal, and eat only acorns during this last period. It is also known as jamón ibérico de Montanera. The exercise and diet have a significant impact on the flavor of the meat; the ham is cured for 36 months. This grade is divided into two subtypes:

In particular, the ibérico hams from the towns of Guijuelo in the Salamanca province and Jabugo in the Huelva province have their own Denominación de Origen. Almost the entire town of Jabugo is devoted to the production of jamón ibérico; the biggest producer is 5J Sánchez Romero Carvajal.

The term pata negra  (black foot) is also used to refer to jamón ibérico in general, and may refer to any one of the above three types. The term refers to the color of the pigs’ nails, which are white in most traditional pork (Sus domesticus) breeds, but black for the Black Iberian breed. While as a general rule, a black nail should indicate an Ibérico ham, there are cases of counterfeits, with the nails being manually painted.

Jamones de bellota are prized both for their smooth texture and rich, savory taste. A good ibérico ham has regular flecks of intramuscular fat (marbling).

About Wayne to the Max